Beer was of significant importance to ancient Egyptian society and was enjoyed by people of all ages as a staple drink of everyone; The rich and the poor, the young and the old. Wages for Egyptian workers were often paid in beer and the Egyptian gods were made offerings of beer. Some ancient Egyptians were buried in their tombs with beer so that they could drink it in the afterlife! It is known that the workmen living in the workers village at the great pyramid of Giza received beer three times a day as part of their payment. Archaeological evidence has revealed that as a staple foodstuff, ancient Egyptian beer was not particularly intoxicating but was actually nutritious, thick and sweet.

Beer also figures prominently in Egyptian literature and sayings. For example, an inscription from around 2200 BC says “The mouth of a perfectly contented man is filled with beer.” Another, from the Instructions of Ani, says “When she sent you to school, And you were taught to write, She kept watching over you daily, With bread and beer from her house.” Beer and bread were part of every ancient Egyptian’s daily foods.

The Egyptian cat goddess Bastet represented both the gentle domestic cat and the war-like lioness. Egyptian gods and goddesses closely resembled the appearance of humans, but many of their gods, such as Bastet, were also perceived as human hybrids depicted with human bodies bearing the heads of animals. These symbols were used as a recognition aid and a device to visually convey the powers, identity and attributes of the deity.

According to one myth referred to as “The Book Of The Heavenly Cow,” Ra, who was the actual Pharaoh of Egypt at the time, was becoming old and began to feel that the people no longer respected him or his rule. He did not react well when people began to break laws and make jokes at his expense and he decided to send an aspect of his daughter Bastet, also referred to as the “Eye of Ra,” to punish mankind. Ra sent her to earth in the form of a lion, sometimes referred to as Sekhmet or Hathor, depending on who is telling the story. Ra’s warrior goddess and tool of vengeance waged war on humanity slaughtering thousands until the fields were awash with human blood. When Ra saw the extent of the devastation he feared she would kill everyone so he summoned his daughter back to his side. However, in her blood lust, she ignored his pleas. So Ra arranged for 7,000 jugs of beer and pomegranate juice (which stained the beer blood red) to be poured all over the fields around her. She gorged herself on the “blood” and became so drunk that she slept for three days and awoke with a terrible hangover. Thus mankind was saved from her wrath.

Bastet was extremely popular throughout Egypt with both men and women from the Second Dynasty of Egypt (c. 2890 – c. 2670 BCE) onward with her cult centered at the city of Bubastis from at least the 5th century BCE. She was first represented as a woman with the head of a lioness and closely associated with the goddesses Sekhmet and Hathor. But as those deity’s iconography depicted her as increasingly aggressive, Bastet’s images softened over time to present more of a daily companion and helper than her earlier forms as savage avenger. Scholar Geraldine Pinch writes:

“From the Pyramid Texts onward, Bastet has a double aspect of nurturing mother and terrifying avenger. It is the demonic aspect that mainly features in the Coffin Texts and the Book of the Dead and in medical spells. The “slaughterers of Bastet” were said to inflict plague and other disasters on humanity. One spell advises pretending to be the ‘son of Bastet’ in order to avoid catching the plague.”

Although she was greatly venerated, she was equally feared as two of her titles demonstrate: The Lady of Dread and The Lady of Slaughter. She is associated with both Mau, the divine cat who is an aspect of Ra, and with Mafdet, goddess of justice and the first feline deity in Egyptian history. Both Bastet and Sekhmet took their early forms as feline defenders of the innocent, avengers of the wronged, from Mafdet. This association was carried on in depictions of Bastet’s son Maahes, protector of the innocent, who is shown as a lion-headed man carrying a long knife or as a lion.

In Bastet’s association with Mau, she is sometimes seen destroying the enemy of Ra, Apophis, by slicing off his head with a knife in her paw; an image Mau is best known by. In time, as Bastet became more of a familial companion, she lost all trace of her lionine form and was regularly depicted as a house cat or a woman with the head of a cat often holding a sistrum. She is sometimes rendered in art with a litter of kittens at her feet but her most popular depiction is of a sitting cat gazing ahead.

In short, the story of Bastet is a story of how beer saved the world. History has again and again shown that beer has changed the world in significant ways. The name Bastet is a celebration of this fact and is an homage to one of the world’s greatest beer making cultures, ancient Egypt. 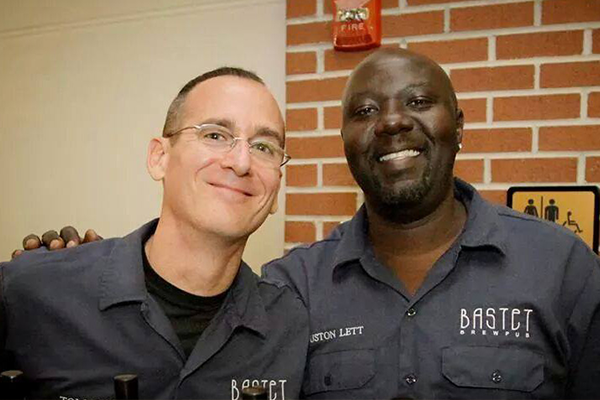